The festival of San Fermín, known locally as Sanfermines, takes place in the northern city of Pamplona in Navarre each July and has become one of the most iconic and popular festivals across Spain. The festival, held in honour of Saint Fermin, dates back centuries and was originally celebrated in October before being moved to July in order to take advantage of the warmer weather. Over the years the festival has grown into a week-long celebration with many events being added. It has since become remarkably popular not only across Spain but worldwide and attracts many foreign tourists. The popularity of the festival among tourists could also be attributed to writer Ernest Hemingway who wrote about the festival many times, most famously in his novel ‘The Sun Also Rises’. Hemingway had great enthusiasm Sanfermines, and returned on several occasions to enjoy the festival. 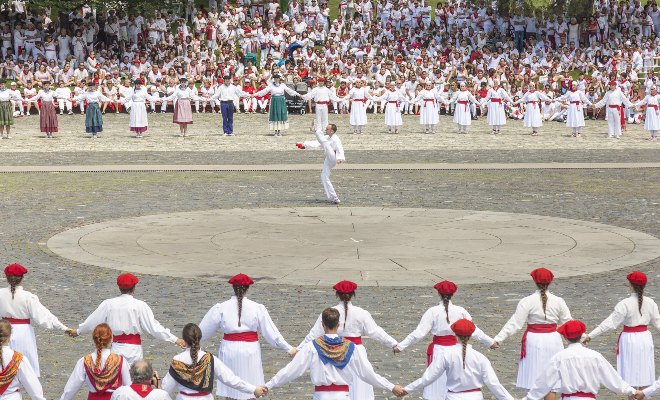 Festivities begin on 6th July with the ‘Chupinazo’ where large crowds dressed in red and white gather in the city hall square holding up their red neckerchiefs as they await the launch of a rocket from the balcony of the city hall. This rocket marks the start of the festival and the partying commences, this event is known for its particularly lively atmosphere as the crowds bring the festival to life.

The following day the San Fermín procession takes place and a statue of the saint is transported through the old town accompanied by religious dignitaries, dancers and entertainers. Each day there is a large variety of shows, activities and concerts and participants can enjoy fireworks every night. Daily events include the Gigantes and Cabezudos procession, the famous Encierro (running of the bulls) and bullfights.

The Gigantes and Cabezudos (Giants and Big Heads) procession takes place each morning. The Giants compose of four Kings and Queens representing America, Asia, Africa and Europe; other figures include the Cabezudos which are costumes with large wooden heads, Kilikis who carry foam sticks with which they playfully chase youngsters and, Zaldikos, men dressed in red and gold riding horse figures.

The Encierro is perhaps the event that attracts the most attention, and has gained the Sanfermínes worldwide recognition. Every morning from the 7th-14th July just before 8am, daredevils gather to ask for protection from Saint Fermín before they take part in the running of the bulls, the purpose of which is to lead the bulls to the bullring where they will take part in the bullfights later that day. At 8am a rocket launch marks the start of the run and participants run in front of the charging bulls along the 820m route towards the bullring, once all the bulls have entered the bullring another rockets marks the end of the run. It is a controversial, yet iconic, event due to the dangerous nature and injuries that can be sustained by those who dare to take part. 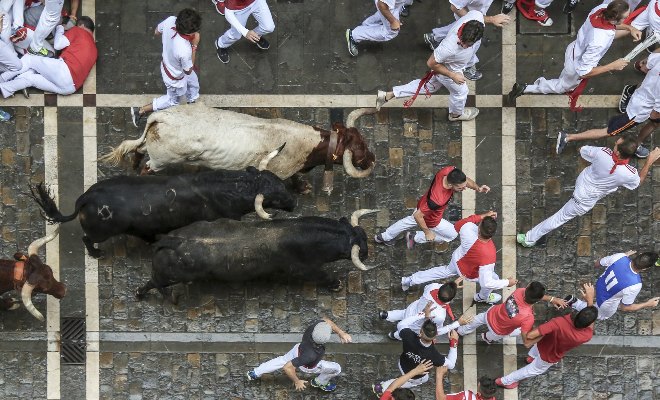 Bullfights take place every afternoon and many social clubs from the town with season-tickets help to create an electric atmosphere within the bullring. The best bulls in Spain are brought to Pamplona to fight and, although tickets can be difficult to get hold of, they are definitely some of the best bullfights to watch in Spain due to the lively atmosphere and enthusiasm among the spectators.

The Paradors of Olite and Sos del Rey Catolico are both within 30-40 minutes of Pamplona so if you fancy taking part in this fascinating spectacle, why not combine it with a trip to Paradors.