In addition to its fabulous historic towns and cities, Spain has a lot to offer for those who love nature and the outdoors.

Spain is blessed with a rich and diverse geography, from the dry plains of Andalucia, to the rich green lands of Asturias and the snowy peaks of the Sierra Nevada. With an abundance of national parks dotted around the country, you will be mesmerised by the beauty of the landscape and diverse flora and fauna. If you are looking for an escape away from the crowded beaches around Spain’s popular holiday resorts, do not overlook the fantastic coastal national parks with quiet beaches in breath-taking settings. For those who enjoy winter sports, you could even combine a day’s skiing in the Sierra Nevada with a weekend on the coast! 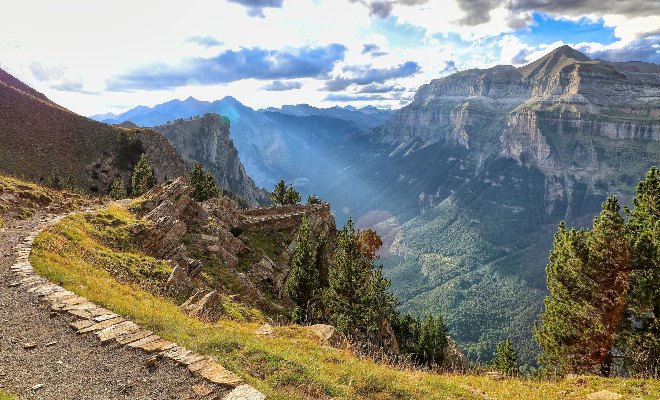 Situated in the Pyrenees of Huesca, in the Ordesa valley, this national park is part of the Pyrenees – Mont Perdu World Heritage site. The dramatic landscapes of the park have been formed by glacial erosion creating the stunning valleys and chains of limestone peaks. Several different walking routes around the park will allow you to enjoy the impressive views, lush green pastures and cascading waterfalls. The park is home to fascinating wildlife including marmots, eagles and the bearded vulture.

The Parador de Bielsa is located on the edge of the national park and would be the perfect base for exploring the park. You can enjoy a day’s hiking and retreat to this cosy Parador in the evenings.

Stretching across the regions of Asturias, Cantabria and Castille and León, the Picos de Europa mountain range consists of three impressive limestone massifs.The park is home to spectacular crags, lakes and forests making the area very popular with walkers, climbers and mountaineers. The Naranjo de Bulnes peak is one of the most famous climbs in Spain; however there is also a number of different walking trails to suite all abilities. Wildlife, including Cantabrian Brown Bears and wolves, inhabit the more remote areas of the region and you will hopefully catch a glimpse of the birdlife which inhabits the park.

There are several lovely towns and villages in the region including Potes and Cangas de Onís, which are interesting places to visit during your trip. The Parador de Fuente Dé or Parador de Cangas de Onís are ideal places to stay when exploring the Picos, a cable car is located next to the Fuente Dé Parador which takes you to the edge of the massifs in under 5 minutes. 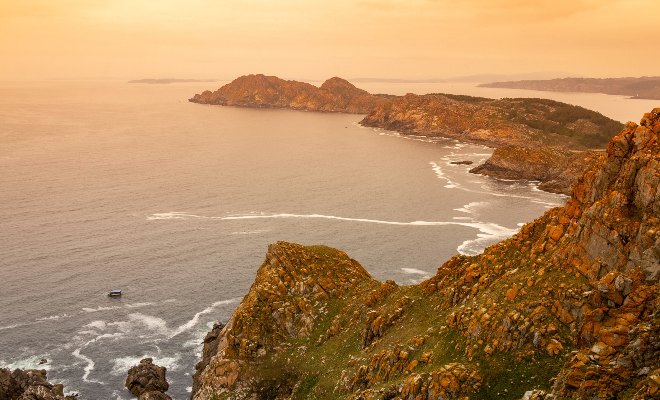 Galicia and its islands

Galicia is a fascinating region of Spain, unique in its independent language, customs, as well as its fantastic seafood-based gastronomy. A very green region, it is difficult not to come across some stunning nature points such as the beautiful Cies archipelago off the coast of Pontevedra, home to indigenous flora and fauna which has secured the island’s protected status as part of the Marine National Park of the Atlantic Islands.

This nature reserve is perfect for walking tours, hiking, or relaxing on the stunning white sand Figueiras and Rodas beaches with their turquoise waters, it is also a great area for casual star-gazing due to low pollution levels. Another island worth visiting in Galicia is the island of La Toja which is renowned for its wellness centres and natural thermal spas, offering a relaxing and rejuvenating experience. A great natural attraction of Galicia is the Rias Baixas estuaries where much of the region’s shellfish is cultivated and which also make up a famous wine-producing region specialising in Albariño wine.

With a number of Paradors in this region, we recommend the Parador de Baiona, Pontevedra or Cambados as the perfect places to stay and enjoy the natural beauty of this coastal region.

The Cabañeros national park is the largest surviving area of Mediterranean forest. It is treasured for the extensive variety of plants and also the endangered species which live there including the wild boar and several different species of deer. The park is a specialist conservation area for birdlife including the black stork and Spanish imperial eagle.

This national park would be an ideal place to stop while exploring the west of Madrid, and could be combined with a trip to visit the lovely historic Paradors in between Cáceres and Madrid. 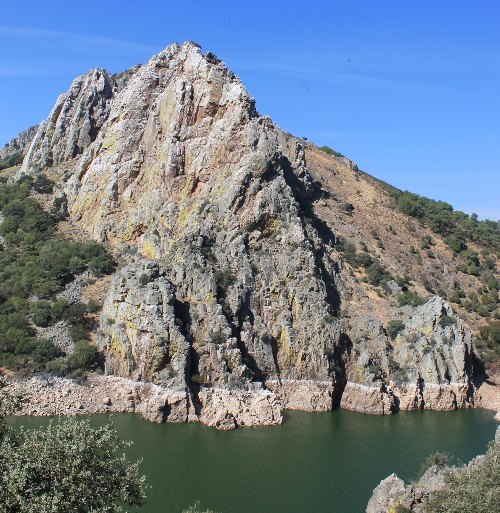 For any ornithologist, the Monfragüe national park is a must-see when visiting Spain. A mountainous ridge extends across the park alongside the River Tagus, which has created dramatic rock formations. In 1988 the park was named as a Special Protection Area for bird-life, and you will be able to spot over 15 different species of birds of prey.

Situated in-between the towns of Trujillo and Plasencia, the Monfragüe National Park can be explored while also admiring the beautiful historic towns which surround it. With Paradors in Plasencia, Cáceres, Trujillo and Guadalupe, the national park can be easily accessed from any of these Paradors. There is a 3-night Parador Ruta ‘Cáceres and the Monfragüe Nature Reserve’ and a 7-night Parador Ruta ‘Gredos and Monfragüe Nature Reserve’ both of which would be a perfect break for anyone who enjoys both history and nature. 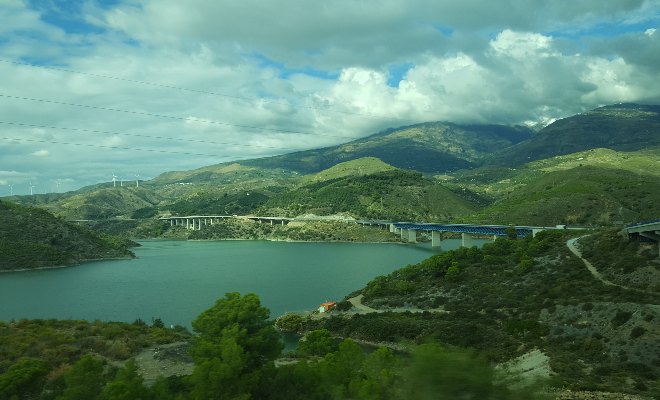 The largest national park in Spain, the Sierra Nevada has a spectacular landscape stretching across the south east of the country. The park not only offers breath-taking scenery, but is home to a number of rare and native plant species, as well as various interesting animal species and birds of prey.

The Sierra Nevada is popular for both skiing and hiking. Despite being Europe’s southernmost ski resort, the high altitude provides good conditions for an ample winter ski season. With a variety of different hikes on offer to suit all abilities, the park can be easily explored on foot.

After a couple of days exploring the city of Granada, it would be the perfect opportunity to spend a day hiking or skiing in the Sierra Nevada.

This unique natural Park is Andalucia’s largest coastal protected area and has some fabulous geological features. It is the only area in Europe which has a true hot desert climate, making winter an ideal time to visit when temperatures are cooler, however still pleasant with an average temperature of between 15-20 ° Celsius.

The park’s mountain range, the Sierra de Cabo de Gata, is home to mainland Spain’s largest volcanic rock formation and there are also a number of unspoilt sandy beaches with clear waters, and coral reefs which make it perfect for snorkelling. The salt flats are an important habitat for birds including flamingos, herons and also migrating birds heading south for the winter months.

A number of quaint, traditional towns are dotted around the park, where you can enjoy local cuisine after a day visiting the park.The closest Parador is based in Mojácar about 1 hour’s drive from the National Park, and would be a suitable place to visit while enjoying a relaxing break and some warmer temperatures in southern Spain. 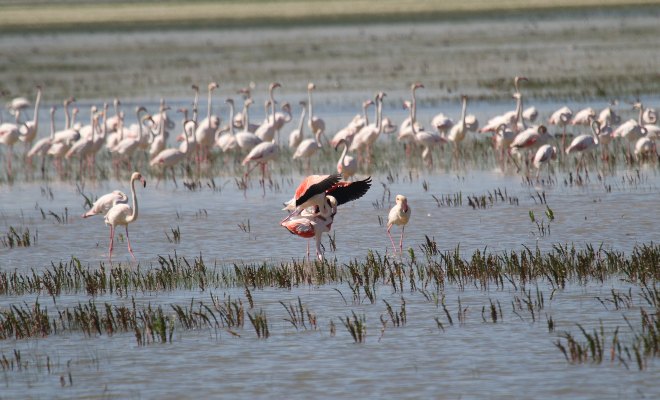 This coastal national park is an area of marshland and sand dunes, situated in the province between Huelva and Seville where the Guadalquivir River flows into the Atlantic Ocean. It is considered to be the largest nature reserve in Europe, and was declared a UNESCO World Heritage Site in 1994. With a number of ecosystems, the park is inhabited by a large variety of migratory birds, fish, deer, mongooses and also the endangered Iberian Lynx. If you enjoy bird watching, over 300 different species of birds can be spotted in the park throughout the year. The park is not only a highly important conservation area for animals, but for plant life too.

Guided tours of the park can be organised in advance, usually lasting either half a day or a full day. The core of the park is not accessible by independent walkers; however there are a number of footpaths leading from the El Acebuche, La Rocina and El Palacio del Acebrón vistor centres. There is also the Sendero Laguna del Jaral Medano del Asperillo trail which is a 5.6km trail and the Sendero del Maneli which is 2.3km.

The Parador de Mazagón is just a 10 minute drive from the nature reserve; this tranquil Parador is situated in a peaceful location overlooking the beach, surrounded by pine trees. If you enjoy nature it is the perfect place to relax and enjoy the beautiful surroundings including the nearby national park. 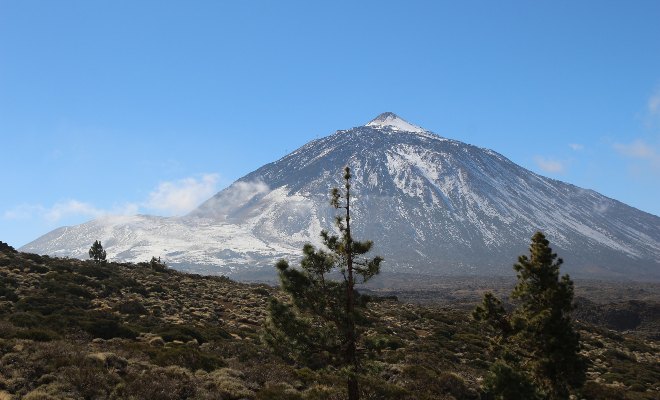 The Teide National Park is a UNESCO world heritage site, home to the dormant volcano, Mount Teide. The volcano and park is the most visited natural attraction in Spain. The mineral rich soils allow the growth of varied plant species which have also adapted to the harsh environmental conditions of the park. Such conditions have also led to the area becoming an ideal reference for scientists investigating Mars, due to the similar conditions between the planet and Teide. It is also a popular high-intensity training site for cyclists and a popular film location for science fiction films.

If you would like to explore this beautiful setting, there is no better place to stay than the Parador de Las Cañadas del Teide which is located in the heart of the national park. Guests can enjoy the spectacular views of the volcano, and explore the entirety of the park and island with ease.