2016 was a very significant year for literature marking 400 years since the deaths of both William Shakespeare and Miguel de Cervantes on the 22nd and 23rd April. As such, many literary festivals and theatres paid homage to both of these great writers who are arguably the most notable from their respective countries. 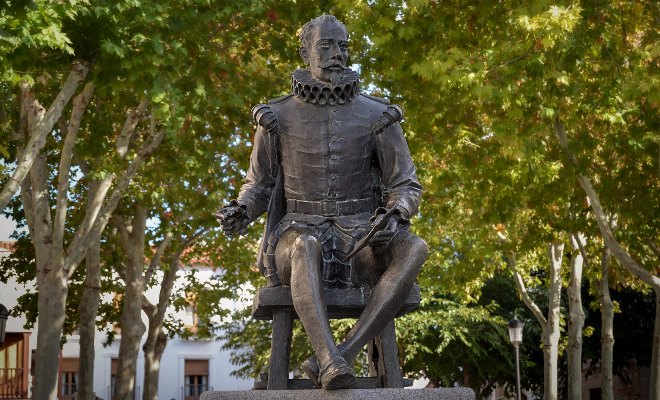 Miguel de Cervantes is one of Spain’s proudest exports and is an incredibly important figure in the literary world with his most famous work, Don Quixote, being one of the earliest examples of modern Western literature and often cited as the first canonical novel. His famous tale follows the adventures of Alonso Quixano whose love of chivalric tales and loss of sanity sends him on a quest to restore chivalry and justice and undo the world’s wrongs under the moniker Don Quixote.

In addition to his literary endeavours, Cervantes led a fascinating life. In 1570 he put down his quill and picked up a weapon to serve overseas as part of Spain’s military. He was noted for his bravery as a soldier and sustained significant injuries during the Battle of Lepanto against the Ottoman Empire, maiming his left hand (luckily he wrote with his right hand). In 1575, whilst returning to Spain he was captured by Turkish ships which led to his imprisonment and enslavement in Algiers for five years. After several failed escape attempts, he was finally returned to Spain after his ransom was paid. On his return he worked as a tax collector for the Armada, collecting from small towns and villages whilst pursuing his literary passions. His time spent travelling through the various towns and villages provided him with plenty of material for his many plays, poems and essays. His life in Spain was tumultuous and he completed two stays in jail, it is even rumoured that he began writing Don Quixote during his stay in Seville’s notorious prison.

Despite this interesting life, Cervantes legacy lives on through Don Quixote, whose popularity spawned numerous plays, films, operas, and a famous ballet. It has been translated into nearly 50 different languages and is celebrated globally. The work even inspired other Spanish notable figures such as Pablo Picasso and Salvador Dali who have produced well-known illustrations for the tale. Don Quixote’s story has stood the test of time for 400 years, and we are sure that it will continue to live on for many years more.

One of the most famous locations connected to Cervantes is Alcalá de Henares, his birthplace. The city has developed much of its cultural centre around this association and, due to its prestigious university, is one of Spain’s most important educational centres. Alcalá de Henares continues to honour its most notable citizen through the Cervantes Award Ceremony which takes place each April and celebrates Spanish-language writers; and Cervantes Week, a festival held each October featuring lectures, theatre performances, concerts and traditional markets.

To explore more of Spain featured in Don Quixote, head to Toledo where you can easily access the surrounding La Mancha region whose plains are home to the windmills which have become synonymous with Cervantes’ greatest work.

Paradors also have the Don Quijote Ruta which takes you through some of the areas featured in Cervantes’ work.